My friend and colleague, Marcia, and I made a pact last fall: this year we would embrace winter. We wouldn’t complain about the cold or how long the season lasts in this state (MN, in case you needed that info). I mean, this is where we live, have lived, and will continue to live so suck it up, buttercups.

The pact came from her sharing with me about the Danish concept of Hygge. Pronounced “HUE-guh”, blog writers for Ingebretsen’s describe it this way:

Hygge is usually translated into English as “coziness.” But devotees of hygge say it is more than that. In fact it is much more, say its devotees – it’s an entire attitude to life. Perhaps it is hygge that helps Denmark and other Scandinavian countries continue to be named the world’s happiest countries.

Scandinavian countries have long, cold winters and hygge is a response to that fact. With up to 17 hours of darkness per day in winter, and 0C as the average temperatures, people spend more time indoors as a result and that means more focus on home entertaining and family.

We also found that also, those in northern countries with long winters, also find ways to spend more time outside – enjoying the cold.

And so, I’ve been concentrating on ways to keep up this goal of embracing the long, cold, winter season.

One of the key things for me is being warm. Dressing warmly when going outside is a no-brainer, but inside? Different story. I don’t like to feel bulky. But maybe I could drape a blanket on my lap? Yes, I can do that. Even better… knit one! I haven’t knit in a long time and I loved the idea of having a purpose to take it up again. I don’t know that I’ll finish this blanket before the end of the season, but I don’t care. As it gets bigger, it will both warm me and make me happy as I enjoy the process. It’s a relaxing thing to do with my fingers while watching the some TV or listening to the audiobook that I just can’t wait until my Monday commute to start up again (the latest one I just finished, btw, is Kelly Barnhill’s MG The Girl Who Drank the Moon – highly recommend, especially in audio. Just beautiful.)

Additionally to keep warm, not gonna lie – we said good-bye to the whole “save money, save energy” BS of 68 degrees inside and frequently jump to 72. It’s so much nicer. (Sorry, Dad.)

Another Ingebretsen’s blog talks about light. One of my favorite things about the Christmas season are the lights. We don’t have enough room to keep our tree up much past the new year, but today, I finally strung up some smaller, white lights: 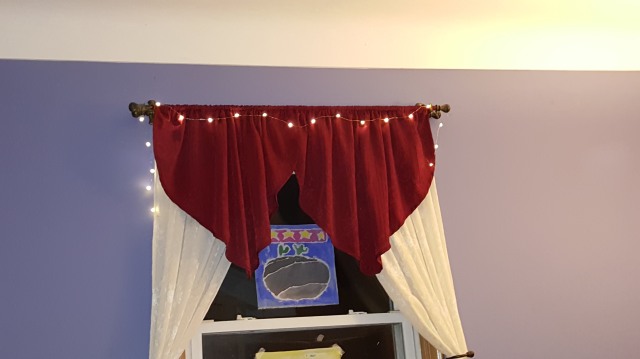 Don’t they look pretty? Warm and inviting? Hygge in our living room, indeed.

We’re at mid-February and regardless of whatever the groundhog did on the second, we’ve got the rest of this month, all of March, and a good part of April ahead (or all of April, who knows), so I’ve got a few more things I’ve been doing and am hoping to do. Read and write liberally. Eat cake. And maybe get in some snow trail hikes. It may be cold, but the good news is that often means the sun is shining brilliantly. Can’t go wrong there. Some would say they’d rather not ever leave the house during winter, and feeling cozy in my home is very often the most appealing thing, but I also know that I need the fresh air and the light to see me through.

What about you? If you live in a cold climate, what sees you through?

I had a difficult time coming up with a great song to match this post, and a good contender was some kind of Willie Nelson song (honestly, his “Still Not Dead” really almost won, because, funny), but I rather like this FB video shared by a friend recently on animal hugs. It’s a nice representation of another form of Hygge:

Like Loading...
This entry was posted in Musing and tagged cold, coziness, Hygge, warmth, winter. Bookmark the permalink.

2 Responses to Embracing the Hygge Trend