Posted on May 9, 2012 by ProfeJMarie (Janet Rundquist) 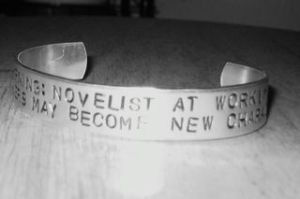 Bracelet from a friend of mine: “Warning: Novelist at work. Bystanders may become new characters.”

My 10-year old son started writing a book this year. I can’t imagine where he got the idea. He’s got big plans for it and will likely see it published before anything of mine ever sees print. That kid has loads of talent and untapped potential. Quite a while back he asked me how I come up with a new character – or just any character in general. Author wannabe simply looked at him blankly, trying to figure out a way to sound wise and helpful. I’m pretty sure he saw right through me when I gave him some general nonsense about looking to traits he liked in different fictional characters and in “real” people around him. Then I mentioned putting those traits together and imagining that new person in various situations. How do you suppose someone like that would react? Think?

In other words, I punted.

My son asked me that question weeks – maybe months – ago and I have been plagued with trying to come up with an answer since then.

Last week I went to my husband’s jazz band concert and do you know what happened? I looked at the drummer and was immediately reminded of one of my current characters, Zach, and right then and there I determined that Zach was also a drummer for a small jazz ensemble. And then glimmerings of new scenes where he interacts with my main character, Julie, started drifting in my head.

My protagonist, Julie, actually came about while I was mulling over a completely different novel idea – one that I’ve tucked away and may or may not ever come back to. That novel was building around a different concept, one that surrounded sibling relationships. As I pondered the protagonist’s relationship with her sister, my mind wandered and landed on Julie, who made herself a completely different protagonist altogether. Then Julie told me about her family, and thus more characters came into existence.

So this still isn’t really answering the question, is it?

My original answer to my son wasn’t bad, but it might have been a bit premature. Let’s consider the fundamental side of this. Some writers think in terms of plot, then add characters. Others – like me- consider characters, then plot. Given that, let me more succinctly and directly answer the question.

Name your characters, first. This may seem like it is not enough, but honestly, if you have a name you’ve always really liked – perhaps it’s that name for that daughter you never had (and no, I haven’t actually done this…. yet), then here is your chance to use it. Chances are, you will find that once you name a character, he/she might start living up to the expectations of the name.

Consider a characteristic you really dislike or admire. Maybe you really hate it when someone under tips at a restaurant. Now, make it so your protagonist has this trait. You might now be thinking, but now I don’t even like my own main character. Aha! Now give him/her a redeeming quality – maybe it’s related, maybe not. She’s a really bad tipper, but she always pays for everyone else’s meal and sometimes even surreptitiously pays for another family’s meal, too. Look! Character number one.

Consider the times when you’ve either thought, heard, or read, “Really, who DOES that?” Why, your new character, that’s who. But why does he do that? When you start asking that question, you discover a great deal. I love to tell the story of when I was at a grocery store I left my cart – with at least 2-3 items in it – at the end of an aisle while I picked up my next item because it was too crowded to take the cart with me down that aisle. When I came back, I found my 3 items on the floor in the space where my cart was. Who deliberately and methodically steals someone grocery cart like that? Maybe it was some world-class jerk who thought she was more important than anyone else and felt she deserved it more than I did. Or maybe it was a harried mother who had a child that kept running off, and she had already worked a 13-hour day and was too tired to carry that child and the 2 items she needed and was thinking, please, please don’t be mad, but I just needed this cart and based upon the items in your cart, you could probably carry them on your own, right – or at least long enough until you get a new cart? Is the mother a single parent? Are there sick family members at home? Are they surviving on food stamps? Thinking through these possible scenarios not only produces a possible character, but starts developing her, too.

And while we’re at the grocery store, look at store products. Who else buys the things you do? Who buys the stuff you would never buy? This might then lead you to questions about your character’s taste in food, shampoo, clothing and whether or not your character is a bargain hunter or if he just buys anything he likes without looking at price tags.

Look to yourself. There’s a little bit of us in everything we write. Ana, in my first novel (which hopefully one day you’ll be able to meet her), is an educator. Hey, guess what? So am I! It wasn’t hard to choose an occupation that was similar to my experience. This might fall under the “write what you know” umbrella… but it doesn’t have to be everything you know or be you (and actually should NOT be you). For example, Ana is also Latina, which I am not. Part of why I made her Latina was to fulfill a part of me that has a special affinity for many different aspects of the Spanish-speaking world. I taught Spanish for several years and lived in Nicaragua for a few months. I wanted to speak to that experience, even if wasn’t actually a part of my heritage. Basically, a character can come from something that is close to your heart.

These are just a few techniques of many – and some will work for some characters, but not all. There are many other sources out there that give some fun advice in this area. One in particular that I found amusing a while back was a post by Julia Munroe Martin, “I’m Not Above Spying” where she actually takes photos of strangers to give her inspiration. Let me just go on record and say that taking the photos might not be, um, necessary – but observation of those around you in a coffee shop, a McDonalds, or a Lifetime Fitness is another great avenue for character creation.

The good news might be that once you have your character, you’ll always have him/her. In fact for me, I can say that once I create them, I find it extraordinarily difficult to un-create them – or even change fundamental aspects of them. Brian is Julie’s brother and due to a particular plot point, I thought I might need to change him to be her sister, instead, but I cannot seem to do it. Brian already exists. He has a history (even if I don’t actually know all of it yet) and an important role to play. So I’ve changed the plot point – which has actually made the plot better, so thank you, Brian, for showing up. Sure, you might have better luck with changing character traits, but listen to your people, if they become stubborn about changing, there’s probably a good reason for leaving them alone.

What is your favorite technique for creating a new character?