Reviews that aren’t really reviews, but glimpses into some books I’ve read that might cross your path… and if they don’t, maybe some of them should: 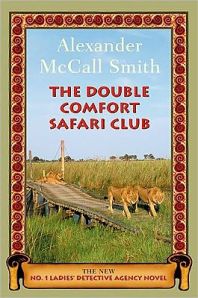 This novel is the 11th installment of The No. 1 Ladies’ Detective Agency series. I wrote about the 10th book last month. Well, sort of. I wrote about the series as a whole so I don’t think I need to do much more for this one… except to mention that this one takes an interesting tack in perspective. It starts with Mr. JLB Matekoni’s point of view (Mma Ramotswe’s husband – Ramotswe being the main character) and included other narrative perspectives as well. I liked the change-up. Plus, this story included more drama of a serious injury, which also drifted from Smith’s norm.

Overall tone and theme maintained themselves as strong as ever, and I continue to enjoy Smith’s series. He has a couple of other series that I have not yet tried. If anyone else has read these other series, I welcome your thoughts.

The Weird Sisters, by Eleanor Brown 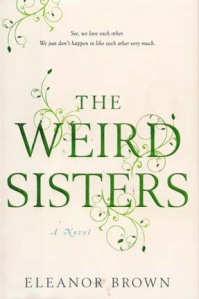 I believe I first heard of this novel through Amy Sue Nathan’s blog, Women’s Fiction Writers, and because I started following the author, the title naturally stuck in my head. The story tracks three sisters who use the excuse of their mother’s breast cancer diagnosis to return home (although one never left) and find a way to fix their own lives. I use the term “excuse” because even though the mother experiences quite an ordeal with the diagnosis, it isn’t really about her or the disease. Rose, the oldest sister, faces the fear of leaving all that she has known and her oldest child responsibilities. Bean, the middle sister, faces her demons of being that middle, lost child. Cordy, the youngest sister, faces the reality that her wandering days must come to an end when she discovers that she is pregnant.

I sometimes had a hard time getting a read on the parents’ characters, but could let that go most of the time since the story isn’t theirs. What I most enjoyed was that this novel generally veered around clichéd plot twists and character development. Yes, the idea of a cancer diagnosis as catalyst to bring characters together is common – and maybe overdone – but Brown almost makes it an afterthought and while it contributes to the plot, it does not become the plot. All of the sisters could have had extreme conflicts to overcome, but they didn’t. Bean’s is potentially the most serious, but again, none of these conflicts outshines the others. They all work together. Finally, the narrative is in third person plural. I’m not sure it always worked (for me), but again, I liked how she once again skirted around common style.

The Fault in Our Stars, by John Green 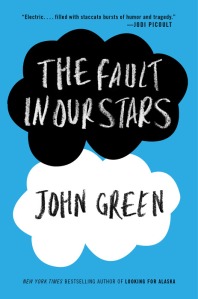 I had never read any books by John Green or had even heard of him until days before this book was to be released. And then I heard nothing but wonderful things about it, and while sometimes an adult novel that receives so much acclaim can be a disappointment to me, young adult ones do not have the same effect. I don’t know why. But because of this, I had no problems jumping on the bandwagon and reading this one right away.

It’s a teen has cancer book. And a romance. And the fundamental plot is actually quite predictable, at least for an adult. It is quite possible that high school students would not guess how things would go, but in the end, it turns out that I did not care that I knew how it would end because the writing is simply beautiful. I believe I described it on Twitter/FB as “one of those books that make you feel like burning everything you’ve ever written for thinking you had any talent whatsoever.” Great dialogue, precise details, excellent pacing, and just overall fluid writing. I laughed and I cried and forced myself to finish it in one sitting so that the emotional pull would not last days.

Meant to Be, by Tiffany King

A self-published ebook, Meant to Be is a young adult (almost pre-teen side) paranormal romance that circles around Krista, a high school senior, who has highly empathetic abilities. She has recently moved to Santa Cruz, where she meets another girl who shares these same abilities. Further, they both recently meet boys… but not just any boys. These boys have been in their dreams for as long as they can remember. Now they are trying to discover what has set them apart from others and why. Krista and her dream boy, Mark, also soon discover that they cannot physically survive without one another and by the end of the book they also find out the cause for this weakness.

Though it has potential, it reads like a draft. For most of you, this might be enough information right there. If you want more of my thoughts, you can read my “official” review on Amazon, as I do write them for all self-published books that I read.

And that is my month.

Currently I am reading The Wise Man’s Fear, by Patrick Rothfuss. And like his first novel, The Name of the Wind, it is a monstrous tome. It may or may not be my only read for March…

More importantly: what are YOU reading? What should I be reading next?